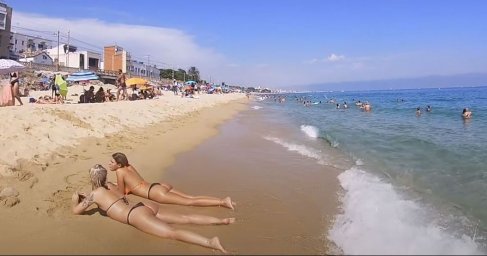 A look around in Barcelona at Platja de Les Roques to Platja de Les Barques Montgat
Montgat Beach is 14 kilometres North-east of Barcelona. It is easily reachable by train within 20 minutes from Placa Catalunya. For even more space on the beach stay on the train up to Montgat nord. The train station is literally next to the beach which here 2.5 kilometres long and around 30 metres wide. You will find much less people and fewer beach vendors than in Barcelona which makes Montgat beach more tranquil than Barcelona's city Beaches of Barceloneta or Nova Icaria. Arrive From Barcelona Sants Station or Plaza Catalunya Station take the renfe train line R1 and get off at Montgat or Montgat Nord which is even less populated.
Montgat, beach
Spain
RSS
No comments yet. Be the first to add a comment!
Log in or Register to write comments